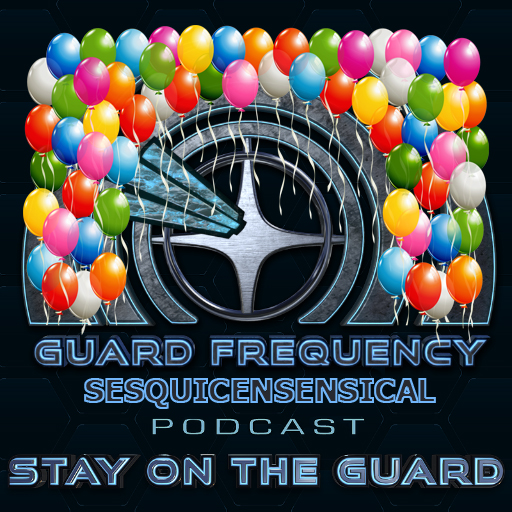 Greetings Citizens and Civilians, you’re tuned to episode 149.5, of Guard Frequency — the best damn space sim podcast ever! This episode was recorded throughout the year and released for streaming and download on Tuesday, January 3rd 2017 at GuardFrequency.com

Well, here we are, another orbit around our nearest G-type main-sequence star completed as we head over the Horizon (aka 2.0/1.5) into 2017! The coming year looks to be a great one for space sims with the anticipated release of Squadron 42, Star Citizen 3.0 as well as major updates for Infinity: Battlescape, Descent: Underground and Elite: Dangerous, it’s never been a better time to be a space sim fan! We thought we’d celebrate by having Lennon turn up early for episode 150 and give Ostron a hand in setting things up for our live 150th.

As you may have noticed our next (proper) episode will be the big 1-5-0, so we thought we’d do something a bit special. On Saturday, January 7, 2017, we’ll be live on twitch at twitch.tv/guardfreq from 4pm to 7pm Eastern to record the show and hang out online with our listeners – and as many Guard Frequency staff and hosts as we can stand. Stick around after the show to watch us battle with and against each other – and any listeners who care to join – in some of the many games we cover each week. Also we took this week off, firstly because we’re trying to get ours and Priority One’s schedules aligned, and secondly because we’re pretty certain Geoff will be observing the Scottish festival of Hogmanay, and will have consumed his bodyweight in Scotch.

Speaking of our sister show Priority One, they’ll be recording their 300th episode right before us – beginning at 1pm Eastern – and both shows will join forces at 7pm Eastern for another couple of hours of joint frivolity. Think of it as a giant waste of a perfectly good Saturday in celebration of our collective waste of 450 recording sessions over the past half-decade.  You’re welcome, Internet. Don’t mention it.