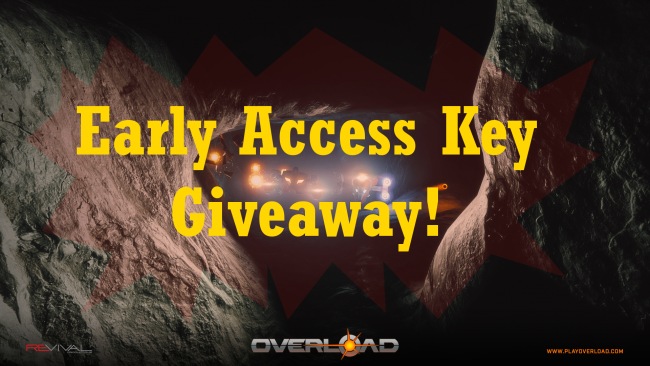 We have two Early Access keys for Overload to give away to our listeners!

How to enter
Listen to our interview with Overload Lead Designer Luke Schneider. During the interview, Luke mentions a weapon that would not be in Early Access had it not already been revealed. Email us with what gun that is, or use our Contact Form.

Greetings Cits and Civs, you’re listening to a Guard Frequency Special Report.  Normally we discuss this kind of spacey, sciency stuff in the Squawkbox, but by the time the show is released on Tuesday, you would have missed this incredibly rare confluence of celestial circumstances by about 36 hours.  Yes, we’re talking about the so-called “Supermoon Eclipse.” Greetings, Cits and Civs, this is Tony, Executive Producer and Co-Host of Guard Frequency. The delayed release of Episode 79 has given some space for controversy to arise, thanks to a certain “internet troll” that has been a constant thorn in our side. Let me address some of the community’s [concern]s point blank.

“Episode 79 Is Indefinitely Delayed! = It Will Never Be Published!”

This is patently untrue. What IS true is that our artisanal publishing methods take time and attention. Our handcrafted, exquisitely produced podcasts give you an authentic, genuine podcasting experience that is so TOTALLY not mainstream. Our development model is groundbreaking and eccentric, but that’s what our backers signed up for – and we WILL deliver. Mark my words, in five years, everyone will be copying the Guard Frequency experience. Hell, we stole the format and process from Priority One – and then they stole our Prelude idea, so then we moved it into Nuggets for Nuggets and … what was my point? Oh, yeah, the show’s late because we’re dedicated to the craft. It’s an artisanal thing, you won’t understand until you try it.

“There Is Only One Host Doing Different Voices!”

Again, not true. We are three different people in three different places that meet online every Friday night to talk about Star Citizen, science/tech/defense news, and general geekiness. Now, I have never actually met my co-hosts in person, so I can’t vouch for the identities they present on-air. For example, Lennon may actually be a leggy, blonde 25 year old Swedish bikini model named… I don’t know, let’s say… Jürgen. Geoff may, in fact, be immortal. My point is, don’t accuse me of saying the ridiculous stuff they say every week. I kiss my mother with this mouth.

“[Redacted] Is The Best Host And Your Favorite Is Terrible!”

This is probably the most misleading and hurtful aspect of the entire controversy. Putting a show like ours together is a team effort. Virtually everyone behind the mic at Guard Frequency has at least one “slash” in their title. Chiv is the Guest Co-Host/Community Manager/Writer. Lennon is the Producer/Audio Engineer/Writer/Co-Host/Web Guru. Jayce is the Guest Co-Host/Co-Host of Priority One/Guest Writer. And I am the Executive Producer/Co-Host/Writer/Editor. Geoff is the Host. Seriously, he just shows up and talks. That’s his whole gig, no “slashes.” On the one hand, he’s a total slacker compared to the rest of us. On the other hand, he shows up every single week – which is more than you can say about the rest of us. So if you have to ask who is the best Host, THERE CAN BE ONLY ONE.

Finally got a recording of co-op Vanduul swarm with Tony, Geoff, and Chivalrybean!

Chiv has a few short thought on it on his personal blog as well.

Sadly, I must announce that my work on Under The Bonnet is coming to an end – at least for the time being. Hand-auditing all of the game data changes in the latest Star Citizen patches has always been a time-consuming affair, and it’s getting tougher and tougher to keep up with CIG’s aggressive patch schedule. My own lack of free time these days makes it even trickier finding a good window to do this kind of thing properly and give the time and attention to detail it deserves.

So for now, I’ll be stepping down. This is a difficult decision; running these articles has provided an incredible amount of insight into Star Citizen’s inner-workings while we see the game slowly etch it’s way into a playable state over a period of time. The game’s development is really starting to ramp up with the release of Arena Commander and other impending major milestones, making this an exciting time for those of us who love seeing what’s happening to the game under the hood. I have absolutely no doubt this is going to be an incredible game when it’s finished (I wouldn’t have thrown several hundred dollars at it otherwise), and I look forward to seeing what develops in the future.

For anybody who hasn’t already, I highly recommend subscribing to AnythingFPS’ Youtube channel – this guy is insanely good at taking the game’s assets (especially unused / upcoming content hidden away in the latest builds) and turning them into amazing artistic masterpieces – even superseding my own legendary content! If you’ve somehow missed his work, now is a great opportunity to get yourself up to speed.

I want to extend a special thanks to the Guard Frequency team for providing a home to these articles. You guys have been great, and I look forward to stalking you with my F7C-S in the Persistent Universe!

This is Parias from Under The Bonnet… signing off.

Hello Citizens and Civilians, and welcome to our new blog version of Nuggets for Nuggets! As well as giving you new, exciting, bite-sized tidbits of information during the show, we thought we’d post them all here for your viewing pleasure!

Here’s the second part of our Under The Bonnet back-to-back special! Part one can be found here in case you haven’t seen it yet (and you’ll probably want to, as that article reflects the first released step in Star Citizen’s transition from just a basic hangar simulator into an actual space combat game – the changes are immense). For part two, we cover patch 12.1 which CIG snuck out while I was still going over the previous changes.

We do have a lot of interesting developments this time around – CIG has put a lot more work into the Freelancer, and we’ve now seen the official release of the it’s variants! Yes, the same ones which “accidentally” slipped into the game files several builds ago and were just as quietly removed once discovered.. they’re now in full production with working animations, interactivity, and shininess. To this end they’re also available for purchase for those who’s wallets sprang out of their pockets after seeing the awesome new Freelancer commercial; I know mine almost did.

As is always the case with smaller-scale updates, there are fewer things to go over so I’ll probably be going into more detail about normally-frivolous things this time around. Enjoy.

A new month has finally heralded the release of the much-awaited Dogfighting Module (more formally known as “Arena Commander”) release for Star Citizen! After more than a few mishaps and unexpected delays, the team finally rushed it out the door early last week…. and then rushed it out the door again a few hours later after realizing the actual dogfighting maps had accidentally been excluded somehow. Whoops.

But everything’s in order now and many of us have had a chance to check out the first evidence of real, actual gameplay that Star Citizen has to offer. This turned out to be one of the largest patches yet (understandably), bringing the game download size up to 10GB. This also makes for a somewhat daunting exploration of the files given the sheer amount of stuff that’s changed… you’ll also notice we’re back down to Build 75 now. Correspondingly, I’ve noticed that the Client_Release.id file shows a completely different branch this time (“release12” vs last month’s “patch11”) so there’s some strong evidence that we’re working with a very different build this time.

In fact, this build is so different that it took me several days to actually work through the insane number of changes and pick out what was worth reporting on! It actually took me so long that CIG snuck out a second update while I was still working on this, so you’re actually getting an Under The Bonnet back-to-back special. See part two here.

CIG has also confirmed that the .PAK files have been locked down a bit; Scripts.pak cannot be opened at all now with standard tools (and requires a bit of extra know-how parse), and while the other archives can still be edited freely, the game will fail to read them properly on boot-up if modified. This limits the amount of fun one can have versus the previous builds, but is understandable given the need to keep the testing environment sane while the actual gameplay builds start ramping up. Still, this is a bit disappointing for modders and machinima artists who relied on being able to manipulate the game’s assets to create some of their works, so I hope they open the game files up to modding again soon (for private gaming only, of course).

Again, this is a very significant new build with a lot of little changes, so I’m going to just be focusing on (arguably) the most interesting bits that I can find – with the script / gamedata changes taking up a sizable chunk of attention. If you know of something else cool that you think should be included, drop a comment! Let’s dive in.

We’ve seen a few cases of the previous process for fixing the infamous “twist / X axis controls should be swapped around” issue some people have with the Arena Commander release no longer working as of today’s patch (12.1). The console command pp_RebindKeys layout_joystick_spacesim now just throws a file not found error, even though the XML still exists in GameDat.pak in the same location.

We haven’t yet thoroughly reviewed the data, but a quick workaround for this has been found:

This seems to work as expected and restore the desired control scheme for those who want it. The existing process prescribed by CIG for implementing your own custom bindings should of course still apply too, for those who were unaware of it.

I’m also still in the process of prepping the next couple of issues of Under the Bonnet; for both patch 12 and 12.1. CIG has sure been busy with their patch releases, and we’re struggling to keep up! I’m expecting to have a back-to-back release covering both patches out shortly though, so stay tuned.

Update:  Reddit user lotexor confirmed that you can actually just use pp_RebindKeys Libs\Config\layout_joystick_spacesim.xml to call the file internally, which is much easier than extracting it first. This seems to indicate the game can still call these binding scripts internally just fine, but maybe the default paths for some commands got broken. Thanks, lotexor !